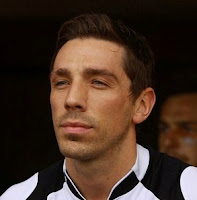 Now that England are out of Euro 2012, it's high time we turned our attentions to the new domestic football season. For Dartford, that represents a crack at non-league's top division following their victory over Kent neighbours Welling United in May's Blue Square Bet South play-off final.

I decided to get the close-season thoughts of Darts defender Tom Champion, who has only recently hit the tweet trail.

First up, you're new to the Twitter party. What (or who) persuaded you to get involved?

I just started to feel like a grandad who couldn't get a grasp on technology so I had to take the plunge!

It's been a little while now since your play-off win over Welling. What memories stand out for you from that day?

The dry mouth after five minutes! The goal from Lee Noble ‪#deflection‬ and the unbelievable celebrations at the final whistle!

Where does your medal live?

It's in the trophy cabinet now but it lived round my neck for about a week after the final! I even wore it on Ryan Hayes' stag-do!

What is the ultimate pre-game food?

Scrambled eggs and beans on toast is what I go for. And a giant coffee before the game has become religion!

Playing in the local park with my older brother wearing a full Tottenham kit with 'Barmby' on the back!

If you took over from Sepp Blatter as FIFA president, what's the first thing you would change?

Goal line technology would have come in a long time ago and Qatar wouldn't have had a sniff at the 2022 World Cup!

And the best players you've played with and against?

Best players played with: Ashley Young, Steve Morison (Norwich), Nicky Bailey (Middlesbrough), Danny Green (Charlton). Best players played against: played Spurs in pre-season a few years back - they had Aaron Lennon, Jermaine Jenas and Tom Huddlestone but best of all was Danny Murphy. He was like the puppeteer pulling the strings! Ran the show!

If footballers were given end of season reports, what would yours say?

My report would say.. he's a great spoiler! Good at breaking up the game and passing simple but needs to get over the halfway line! And loves a yellow card!

What sort of pre-season training regime do you think Tony Burman has in store for you?

I think Tony is planning to step up the pre-season after promotion, so can't wait to be running up and down the golf course next to our ground. He loves a box-to-box too but I think the fitness manual might have turned a page this year!

I played for England U18 Schoolboys vs Rest Of The World at Villa Park. Amazing atmosphere and I'll never forget singing the National Anthem. But winning the play-off final v Welling to get promotion after a long, hard season was probably the best feeling I've had after a game.

A couple of team-mate questions. Who's the best dressed... and who has the dodgiest clobber?

Best dressed - I'll have to go with the skipper, Elliot Bradbrook, but there's not much quality clobber in that dressing room. Worst dressed - he's not at Dartford any more but Adam Burchell had some serious issues with clothing.

What are your expectations of Blue Square Bet Premier? And who are you most looking forward to playing?

It's obviously going to be a lot more difficult in the BSP and we have to get used to the idea of winning less games than we did last year. But I think we can still cause teams problems and we have to aim as high as we can. Realistically, we will be pleased if we manage to stay above the bottom few teams and stay in the BSP for the next season. Most looking forward to Luton away - they're a big club and it'll be great to go there in front of a big crowd and compete with them.

Tell us something we wouldn't know about the gaffer.

When the gaffer gets over-excited, his voice breaks to the pitch of a 12-year-old girl! It comes from nowhere, mid-sentence. It's hilarious. I could be in trouble on that one...

How hot do you have your chicken at Nando's?

I have my chicken lemon & herb at Nando's and I'm embarrassed about that. I can't do spicy food unless I've got a bucket of yoghurt close to hand.

What did you make of Harry Redknapp leaving Spurs?

Very shocked that Redknapp has gone but it all comes down to who his replacement is! If we get a big manager in quickly and hold onto our big players then I won't be too fussed about Harry!

Finally, what does the future hold for Dartford Football Club?

I thinks it's going to be really important for Dartford to hang onto our BSP status at the end of this season. If we achieve that then I honestly think as a club they have everything in place to kick on and make it into the Football League eventually. It's such a good set-up there and the club is run very sensibly so they won't try to grow too quickly by throwing silly money around. But steadily we can keep progressing and the ultimate aim has to be to become a League club in years to come. A lot of that will depend on if we can survive our first year in BSP.